[sic]
Ground Control II: Operation Exodus is an epic real-time action-strategy game that puts you on a futuristic battlefield where only brilliant tactics will prevail. As Captain Jacob Angelus take command of the hardware-intense Northern Star Alliance or the nano-organic technology of the alien Virons. Battle it out in 24 action-packed missions and in multiplayer.

Innovative Gameplay
Keep your enemy on the back-foot by creating new, more powerful alien units with unique abilities by melding your Viron troops together.

Amazing Graphics
Experience outstanding levels of detail. Take a strategic view of your battlefield or zoom in to see the battlescared faces of your infantry.

Unique Multiplayer Modes
2 to 8 players play simultaneously in co-operative or competitive games over LAN or Internet. Unique drop-in game servers allow you to join an on-going game at any time, and compete in equal terms.

Box blurb - # 2009-04-24 09:56:16 - official description
Ground Control 2 is an action-oriented game of tactics and warfare. As Captain Jacob Angelus of the Northern Star Alliance, you will command squads of infantry, artillery, and airpower against the might of the Empire of Terra. Base building and resource-collecting are replaced with unit control and combat tactics where your knowledge of the battlefield maneuvers will make the difference in your fight against a ruthless enemy. Position your troops on hilltops for better aim or inside buildings and forests for protection as you'll need to use every inch of terrain to your advantage. Call in air strikes or assault pods to bring the battle behind enemy lines. Send out scouts to locate the enemy and use spotters for your artillery with the 360° free-roaming camera. Experience the total immersion of futuristic warfare as you lead your forces to victory!

The story begins in A.D. 2741 on a distant planet called Morningstar Prime, a world initially colonized during the 24th century by Crayven Corporation from Earth. Morningstar Prime is but one of hundred planets discovered during mankinds reemergence from the Third World War. Morningstar Prime resembles Earth in many ways, it features indigenous life forms and a similar but still different flora and fauna.

The Great War with the Terran Empire has forced the originally democratic twelve city-states of Morningstar Prime to unite under one military leader and the flag of the Northern Star Alliance.

Battlefield Lost
During the First Stellar War in the 25th Century, the Crayven Corporation lost contact with the colony on Morningstar Prime, leaving them and the other colonies in the outer fringes to fend for themselves. In 2701, the new Terran Empire returned to the outer fringes with the intent of reconquering those colonies. The Imperial forces initially expected little resistance, having assumed that Morningstar would have been devastated and regressed like many other outer colonies.

The first Imperial strike was sudden and savage but the NSA managed to defeat the strike fleet, much thanks to the military competence and leadership of Fleet Admiral T Parker. The initial victory allowed NSA to improve their defenses and gear up for war. Fleet Admiral T Parker, an experienced and wise commander knew that they had won the battle but not the war. She initiated several projects that would search for a long-term solution to the threat from the Terran Empire.

In the following years, the war continued to be fought in space. For several years the Terran Empire attacked NSA space, destroying its colonies one by one, enslaving the people and getting closer to Morningstar Prime, the NSA home world. In 2730, after 29 years of constant war, NSA lost the last of their huge Fortress class ships along with the majority of all their capital ships in a decisive battle outside Morningstar. The NSA had in one single battle lost all their space capability and was at the mercy of the Empire. The Terran Empire ignored all negotiations for peace, they held true to their long-kept tradition: leave no pardon, no surrender.

Fortunately, Fleet Admiral T Parkers' legacy was already in action. Huge electromagnetic domes had been erected on Morningstar Prime to shield the largest cities from orbital bombardment. But they never had the time nor the resources to shield all cities; millions died in month long planetary bombardments. Several urban areas were reduced to piles of rubble and eerie graveyards.

The war entered a brief state of stalemate, as the Empire was unable to penetrate the shields while the NSA were being held prisoners in their own shields. The stalemate was broken when the Empire managed to land their first troopships in the bombarded regions outside the domes.

Jacob Angelus' Company has been sent to Morningstar capitol, where situation is becoming more and more critical and desperate.
For NSA, destiny is at hand; its only hope lies in an ancient and forgotten legend... 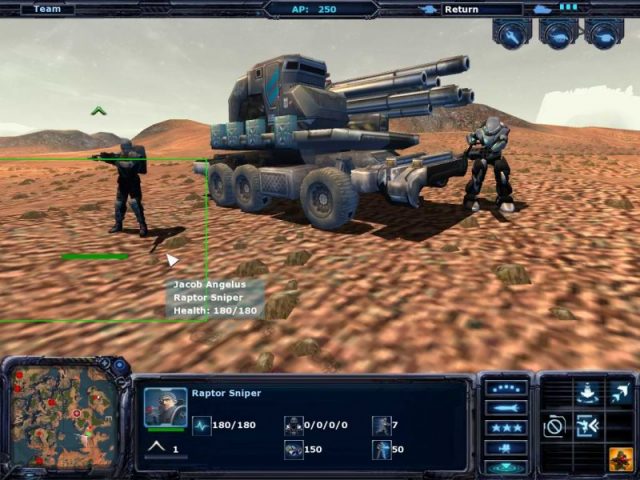