Emergency 2013 is the latest installment in the successful rescue strategy series.

In addition to the full content from Emergency 2012 Deluxe, in Emergency 2013 you can master a new campaign with four additional missions. The eruption of a super-volcano in the middle of Europe threatens to bury everything below rivers of lava. The emergency forces must fight burning forests, toxic gases and handle enraged citizens to secure the emergency lava sink drills.

In the Emergency series for PC, the player acts as a dispatcher in gripping rescue missions.

Clear car wreckages fast to help pave the way for the fire fighters to advance to the source of a blaze! Secure crash sites and at the same time get medical help to those injured. If you have always wanted to direct fire services, police, technical relief units and medics all at once, the Emergency rescue strategy game series is just the game for you.

The player is the officer in charge of everything and sees to it that all vehicles and helpers are in the right place, doing the right thing at the right time. This is where the strong real-time strategy element of Emergency sets in. The player must make clever use of vehicles and personnel such as police officers and rescue dog handlers in order to bring everything back under control following a disaster. Once all victims have been whisked away to safety, the player gets to enjoy the feeling of having saved the day.

Features
* A new scenario: a super volcano threatens Europe
* 4 new missions in Vienna, the Eifel (the mountain range in Germany, not the tower in Paris), Sylt and the Vatican
* 1 additional free play map from the volcano scenario
* 4 player online multiplayer mode<
* New units including the Fire Brigade Drone
* Available as downloadable campaign pack (main game required) and as a retail edition with the new campaign and the contents of Emergency 2012 Deluxe 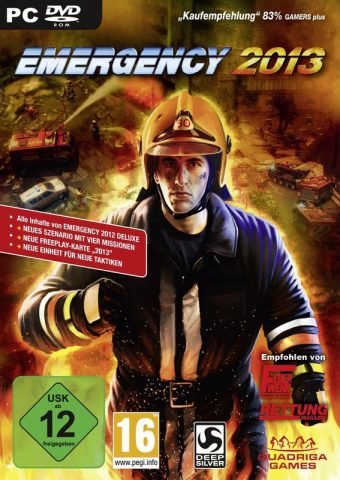