After the unpleasant Kamen Rider Club: Gekitotsu Shocker Land I didn't expect much from the second Kamen Rider game for the Nintendo. Well, Kamen Rider Black turned out to be even worse. Below average graphics and sound and a very very frusrtrating and unintuitive control scheme. It seems they put in quite a lot of enemies known from the TV show, but the levels are boringly designed. Some stages you drive with your motiorbike - even in an underwater stage. I don't know if this is in the show as well, but it feels silly and weird. End of level boss fights are seen from a zoomed in perspective with bigger character sprites. In contrast to the first Kamen Rider game this is completely linear and has no distracting RPG elements. 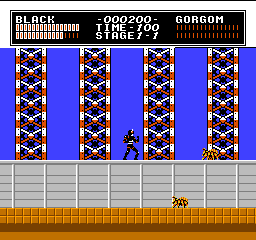