Beyond the Ice Palace

Beyond The Ice Palace and to the North, legend tells of a mystical land where strange creatures
dwell. It is a land of fantasy and magic, of Goblins and Ghosts, of good and evil.

Recently, there has been great upset in the balance of good and evil in these lands. The forces
of evil have been burning down the forests, destroying the homes and lives of the simple
woodcutters.

One night, a meeting was held between the ancient and wise spirits of the woods. A decision
was made to appoint a single person to be responsible for returning the balance of the lands once
again by banishing the evil back from where it came. They blessed a sacred arrow with the powers
of the woods, which would summon a spirit in times of need, and shot it into the air; whoever found
the arrow would find themselves in an adventure of fantastic importance...

Various weapons may be obtained along the route. These operate differently and have varying
strengths.

In times of crisis the Spirits of the Forest may be summoned to sacrifice themselves for your needs,
they will weaken certain enemies and destroy others but use them wisely as you only start with
two spirits though you may find additional ones along the route. 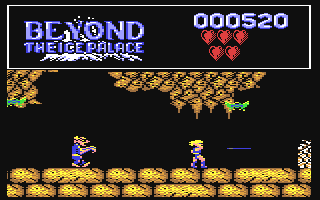 Beyond the Ice Palace in-game screen.