Darklands has a unique mix of features. Good and evil are not enforced on the player. 'Evil quests' and 'good quests' are offered. Reviews noted an "element of free-will" which is a very rare thought when it comes to videogames (I actually cannot think of any other examples of a reviewer saying "free-will" about a game). The reputation system is regional. Thus players can be hated in one region and revered in another. The world is based on 15th century Europe and only contains supernatural elements that people believed at the time (The game is naturalistic by 15th century Europe standards). This is a world of humans, not fairy tale creatures. The manual devotes quite a bit of text to disclaim the presented world as one that was believed to be, not one that was factual, and point out it is a world unaware of contemporary or future reality. The manual claims only 15th century texts were sourced for the game. Characters are free to acquire and nurture skills as they see fit. This means, for example, a physically strong warrior may also devote training to picking locks. A cleric could even learn to pick pockets. Characters age, which comes with appropriate advantages and disadvantages. Or, players may opt to start with an older character who has already acquired and trained in selected skills. Older starter characters have also likely acquired more advanced equipment. Locations in the game are actual historical locations within the Holy Roman Empire. For the player's sake, locations are marked with the historically accurate name and their modern names. The interface present two main modes of interacting with the world. Reading and selecting dialogues for interactive fiction style play and strategic round-based battles (simultaneous turns) in hand-painted orthographic environments. In battle, different weapons and armor have appropriate strengths and weaknesses when interacting with each other. Plate armor, for example, is strong against bladed weapons but weaker against blunt and spiked weapons. This is an open world game with a main quest. There are no set paths to 'win' and the final boss' location is randomized for each play through. It is up to the player to ready themselves and discover the location of the final boss by any of the means provided by the game. 15th century religion plays a tremendous role in the game and main quest.

The game reportedly took 3 years and cost 3 million dollars. An tremendous amount of resources for a non-multimedia disk based 1992 DOS RPG from Microprose. An Amiga version was considered but deemed to much game to run from floppies and to few Amiga customers with hard drives. The Atari ST game known as "Darklands" is unrelated to this one. 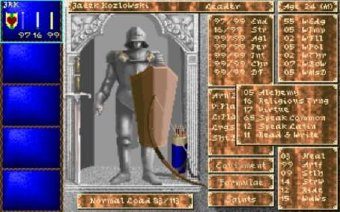