This game is based on an old anime movie and obviously rooted in the novel "Around the World in Eighty Days" by Jules Verne. It is a platform/shooter mix, each level representing a different country/part of the world. In nearly each level you are in a different vehicle, ranging from boats and cars to balloons and even a level where you are controlling a submarine. However this diversity is already the most interesting part. The rest is really average. Shoot enemies here, jump over pits there. It is playable but nothing special. 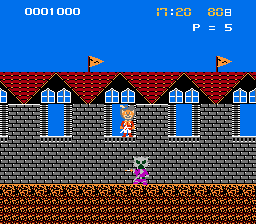