9090. Rarity 6 Rare+. North America NTSC. 1 player only.
Swim up from the bottom of the river. Hop across the surface. They fly through the air! It helps to hitch a ride on a large goose. All the same creatures are back, plus sharks, whales, pterodactyls, dragons, crocodiles, barracudas, ducks and various other birds. To compensate for the defectively designed 5200 joysticks, Parker Bros opted to provide 2 different and unique control schemes from every other version of Frogger. You can point the joystick in the direction you want to hop (or swim or fly), then press the either button to go. Or you can use the 2, 4, 6, and 8 keys on the numeric pad. These options differ slightly from Frogger 1 for Atari 5200.

Controls:
Control scheme, and starting level are set before beginning a game. In a two player game, the 2nd player can set their speed and control scheme at the beginning of their first turn if they wish. This game does not use overlays nor allow different speeds.
START or RESET will begin a new game.

∗ = Joystick or Keypad controls
# = Select Starting level (1 or 3)
∗ or # during play will end the game to change those options.

The 'rules' of Frogger are copyrighted by Parker Brothers. That's odd, but they do make boardgames also. 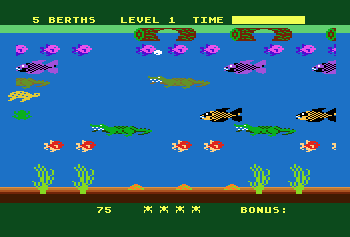