This game is one of the few early "Mega Drive" games that surprisingly didn't lose much of its appeal over the time. The flawless controls and atmospheric, spooky setting make this a fun game to play, even today. The graphics are impressive for an early Mega Drive title, although they are not quite as good as the arcade original. The music fits the setting. There are some points on the negative side though. The game - although featering very varied levels - is rather short. Maybe that is the reason why the difficulty level is so high. There is a "Practice" mode in the Mega Drive version, but it still stays a very challenging and unforgiving game. And to finally encounter the last boss you have to play twice through the whole game, because after the first run a goddess sends you home to grab some magic weapon and you have to begin from level 1, which I found double frustrating. Nevertheless a memorable and overall well done game.

Ghouls'n Ghosts is the sequel to the popular action game Ghosts'n Goblins, originally released in the arcades and later ported to the Genesis. One full-moon night, three years after the battle with Astaroth, a ray of light shoots through Princess Prin Prin, and her soul is stolen right in front of Arthur's eyes. To save his bride's soul, Arthur the knight must battle all manner of evil undead creatures with a variety of weapons, powerful magic and new actions. 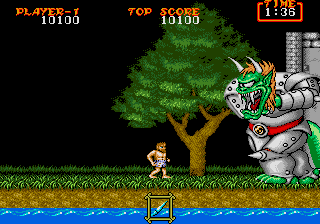