No Apogee game has ever had as many gruesome graphics as Monster Bash, with over EIGHT MEGS of animated/scrolling EGA graphics in all three episodes.

Johnny Dash's bash 'em smash 'em adventure takes him into the evil Under World of Count Chuck. The story starts when Johnny's dog Tex is kidnapped by the Count, along with hundreds of other pet dogs and cats. The friendly bed monster under Johnny's bed tells Johnny where Tex was taken, and how Johnny can use his secret closet passageway to get to the Under World himself. Count Chuck plans to turn all the pets into an army of undead monsters. Johnny grabs his slingshot and leaps into his closet. The Count will not turn his dog Tex into a monster, not if he can stop him...!

Monster Bash is full of scary action and haunting puzzles. No previous Apogee game (to this point) has featured so much ANIMATION. For instance, Johnny can climb, crawl, shoot his slingshot in several directions, fly a broom, and a lot more. And Johnny's super charged slingshot can shoot rocks, rockets, fireballs, and other surprises. There also more enemy creatures and monsters than ever seen in an Apogee game. 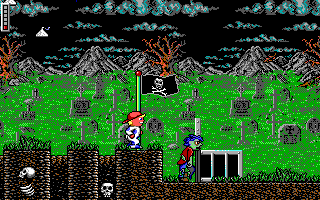