Their Finest Hour: The Battle of Britain
DOS 1989

Used DE-9 connector for the monitor physically identical with CGA and signal backwards compatible with CGA. EGA and CGA monitors are generally interchangeable.*

Example of the limited palette from Catacomb Abyss: 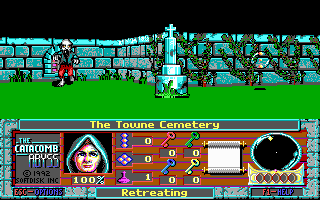 640x350 mode could only do 4 colors at once on a standard 64K EGA card. For 16 colors, lower resolutions were required. But an EGA card with more memory can display 16 colors at once in 640x350 mode. The standard EGA card had an expansion slot to piggyback a very specific memory module to bring the card up to 256K. Most 3rd-party EGA cards came with 256K so these upgraded EGA are often mistaken as being the baseline EGA specification. As such, many games assume the EGA card it is running on has 256K and they wont work with a 64K EGA card. There is also the odd 128K EGA card.

Beginning with EGA, some 3rd party manufactures began including hardware sprites capability. But these of course differ between cards and no EGA sprite hardware ever became standard enough to justify games that used it.

The top-of-the-line EGA card could very well be the ATI Technologies EGA Wonder that offered many enhancements including an 800x560 mode.

The EGA standard is inherently incompatible with with changing the card's registers. The MDA and CGA standards included this rarely used feature.

IBM's previous MGA and CGA cards used separate memory areas in the system bus so that they could be used simultaneously. EGA cars have access to both these areas but not simultaneously. An EGA card in monochrome mode (either text or graphics) left the CGA's memory available. An EGA card in color mode (either text or graphics) left the MDA's available. Thus, one can still use multiple monitors simultaneously if one card is EGA. I know what your thinking, no, two EGA cards will not work simultaneously. However, a Platronics and EGA card can play together. As can a Hercules and EGA. However, a dual-head EGA card could theoretically be manufactured.

*The modes with 200 lines of resolution were intended for CGA backwards compatibility. Using more than 4 colors in these modes requires one of the pins to be reassigned and it only works on EGA compatible monitors that also know to look for the signal even though 200 lines modes are supposed to be CGA only. Reassigning the pin causes graphics become garbled on CGA monitors. Cards that have this feature tend to have a hardware switch to enable or disable it. Some 3rd party EGA cards do not handle CGA compatibility correctly. Also, some CGA monitors physically short a pin that CGA cards do not use but EGA cards do. These monitors can damage an EGA card. Some EGA monitors need to be told they are plugged into a CGA card or they will display incorrect colors. Some will not correctly detect a CGA card and do not have a hardware switch for CGA. Detection is the rarer feature, The IBM 5154 EGA monitor is one of the few monitors that automatically detects a CGA card.

The first Enhanced Graphics Adapter video game was released on May 10, 1984.

Sierra On-Line, Electronic Arts and Accolade published most of these games.