Much like Pac-Man, players maneuver the Lady Bug through the maze to gobble dots, hearts, letters, and the occasional vegetables of ever increasing point value while avoiding insects and pesticides. Increasingly more dangerous insects are released from the center square according to a timer (visually shown as the maze boarder) and will relentlessly be re-released if killed by a pesticide. Insects cannot be killed by the Lady Bug directly, but only if the collide with pesticide. Gobbling hearts and letters will temporarily freeze insects. The most noticeable difference from Pac-Man is the ability to alter the paths of the maze by rotating one of the twenty green gates 90° at a time by pushing it with the Lady Bug. A much more complex difference occurs with the bonus systems. The proper combination of hearts and 3 randomly chosen letters from 2 sets that spell either SPECIAL or EXTRA will reward a player with an advancement to the next level or an extra life. One of the letters in the maze will be S, P, C, I, or L, another one will be X, T, or R, and the last one will be A or E (A and E can be used for either word while the other letters apply only to one of the words). Gobbling a letter from the maze that is the same ever cycling color of the word on the top of the maze will change the word's color and add that letter to it (until the word is completed). But if the letter is not the same color as the word, the letter only counts for points and does not serve to complete the word. Heart bonuses related to score and their color ever cycles the same as that of the letters in the maze. Blue hearts will add a score multiplier of 2X for the 1st, 3X for the second, and finally 4X for the 3rd heart. Hearts of any other color only provide points and change word colors.

Note about the maze, the maze and gates are left-right symmetrical. This is easily forgotten as each gate rotates independently (thereby showing asymmetry among the paths even though fixed maze walls remain unchanged).

Pac-Man-ish game.
Lost all my pocket money to this machine back in the days.

Moving a ladybird inside a labyrinth, collect all the dots and letters (with the right colors) to form the words "EXTRA" to win a life or "SPECIAL" to win a credit!

Been looking for this game since the pizzeria closed in the 80's. 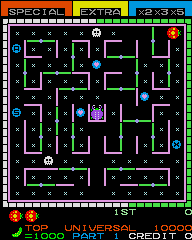