This game was inspired by another game called Colossal Cave Adventure (later known as Colossal Cave) by Will Crowther and Don Woods. Adventure was hundreds of kilobytes in size and ran on a room-sized mainframe; Mr. Robinett's Adventure fit in 2k and ran on a VCS, which is smaller than a VCR.

Mr. Robinett developed this game against his boss' instructions (who said it was too big).

Find the hidden dot that removes a wall and enter a secret room where the words 'Created by Warren Robinett' are spelled out.
Mr. Robinett also did this without permission and it was discovered after he'd left employment with Atari. At the time, programmers at Atari were not given credit, could not discuss their work in public, had no official creative input, were not allowed to collect royalties and were being paid less then some of their own secretaries.

In a development version of the game, there was a roadrunner character that just ran around.

Late in the development of this game, Mr. Robinett was told by marketing to change the game to 'Superman' to ride the hype of the Superman movie that was released in 1978. John Dunn came to the rescue and volunteered to do the Superman game.

Rocky's Boots was the followup to this game and uses a later version of the adventure engine (ADV# engine).

About the release date:

has this clone
Indenture (MS-DOS) 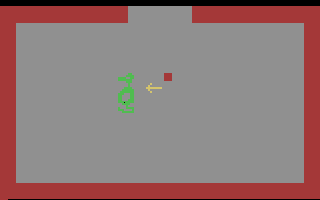