A beat'em up with many layers of complexity, very engaging in multiplayer mode (with a great focus on classes' synergy)

Based on AD&D rules this game worked on the same principal as Streets of Rage only much more advanced. There were four characters (elf,cleric,dwarf,fighter) and a maximum of four players at once though these machines were rare. Each level had a nasty boss and the ultimate aim was to kill the evil Lich king.
Characters could carry many items at a time including daggers,burning oil, magical items, rings and spell scrolls. Every character had several alternate weapons and could pick up and wear different equipment to reduce damage taken, jump higher, hit harder ect. There were shops every few levels where items could be bought and sold. Most monsters killed dropped either gold or items.
As the game progressed characters went up levels and gained more spells (elf and cleric) or better weapons (fighter and dwarf).
Control consisted of one eight way stick and 4 buttons (attack, jump, use and select) per player, so there was much fighting for elbow room. Pressing start while playing showed what equipment you were currently wearing. 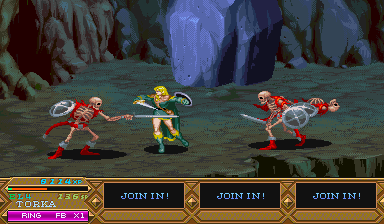