MagiTek has been reborn. And the end of the world is near. Ages ago, evil beings created powerful creatures called Espers, and unleashed them against each other. The resulting battles left their world a smoldering rubble. Legend has it the Espers destroyed themselves and most of humanity. Magic disappeared forever. Centuries have passed and a rational world now exists with Espers living only in myths, until one frozen solid since the ancient wars is unearthed. Suddenly, there are reports of magical attacks on civilians. Imperial Commandos launch raids using magic-powered MagiTek weapons. Magix is obviously alive and the world is in danger again. Who or what is behind the rediscovery and redeployment of this legendary power? What chaotic plans exist that will wreak havoc on this orderly world?

The last of the Final Fantasy series to be released for any Nintendo system, Final Fantasy VI showed a bit of improvement on the side of graphics. However the game falls out of balance quickly, espically after getting espers. The story was alright, but this is not one of my favorates of the series. The music from this game, however, is some of the best in any Final Fantasy game.

# 2007-01-01 17:35:13
From my point of view this was the peak of the series, possibly not including VII. The combat system was refined from V and the story is much more gripping, even from early on. That and the increased dose of humour that was reflected in Chrono Trigger and then in FFVII, a welcome improvement.

(The odd numbering is due to the fact that this was the sixth FF game in Japan, but only the 3rd to get a US release, hence the English translation was badged as Final Fantasy III)

(Flying_Arsedoctor) - # 2007-01-01 17:35:13
A great RPG that could've been better... the only thing that I didn't like about this game was the character classes. ALL the characters can use ALL magic, and most of the equipment can be used by everyone. There is really nothing that sets one character apart from another. Sure you have the special skills, but trust me, those become obsolete fast. Towards the end, all of your characters will be either dual-wielding or casting Ultima in every battle.

There is also an unofficial re-translation of the game, which according to the authors (RPGOne) is more faithful to the original. The patch also inserts the original Japanese titles screen and gives you the option of fixing a few infamous bugs such as the Vanish-Doom bug: RPGOne 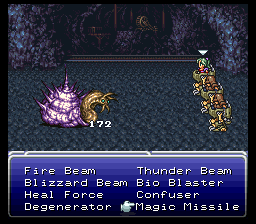