The Goonies is a maze-like platform game based on the movie of same name. Your task is to find and rescue all your friends, who are behind closed doors which have to be opened with bombs that can be found from killed enemies. You also have to find key parts, which are also behind said doors. The game's difficulty level is low. Once you know your way through the rather small mazes the game offers not much challenge. The Famicom Disk System version was released over two years after the initial Famicom cartridge version and could only be obtained via Famicom Disk Writer kiosks for a low price. While the game was pretty good for 1986 standards, many more and better games had been released since then making it a rather unimpressive but still well playable game. 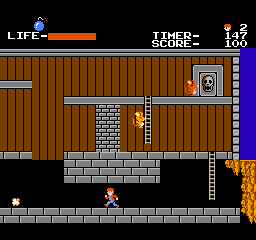