It's up to you to assist Mario as he restores peace at Mushroom Castle. Bowser is up to no good again -- stealing the Power Stars that shield the castle. Bob-ombs live inside the paintings decorating the castle and Bowser has invaded them. Mario will have to enter the painting world, retrieve the Power Stars and halt Bowser before he turns the Bob-ombs into a monster militia. This one-player game for the Nintendo 64 raises the bar for video game excitement. Bowser is no competition for Mario 64.

# 2013-09-15 14:22:30 - official description
Mario steps into a whole new dimension in this unforgettable launch title of the Nintendo 64. Unravel the secrets of Peach's castle, find all 120 stars and defeat Bowser in this cult classic that set the rules for all 3D action games.

Although it managed to stay faithful to the spirit of the series, Super Mario 64 tried a new approach as it brought the concept of exploration into platform games. Mario gained many new moves in the process, yet remained as easy to control as ever thanks to the inclusion of an Analog stick on the Nintendo 64 controller. This innovation quickly became a standard in the industry. Super Mario 64 is often cited as one of the greatest games ever made.

Super Mario 64 was the first games for Nintendo 64. Since the company came out with the original Nintendo, with it's first game Mario Bros, it's only logical that the company would come out with a Mario Bros game for their new system. You may have noticed that everytime Nintendo came out with a new system/platform, they came out with a Mario game to go with it. Well, Mario 64 is Nintendo's N64 game.
This game works good on the UltraHLE emu, if you have a decent processor and a Graphics accelerator (or just an EXTREMELY fast processor, but even then, it's still good to have a graphics accelorator). But of course, it works better on the real Nintendo 64. At least, I thought it looked better on mine, as my opinion.

Super Mario 64 revolutionized 3D gaming with its expansive environments, colorful graphics, fluid play control, and myriad puzzles. Although many 3D platformers have come and gone, few have lived up to the standards set by Super Mario 64.

influenced by
Croc: Legend of the Gobbos (PS) 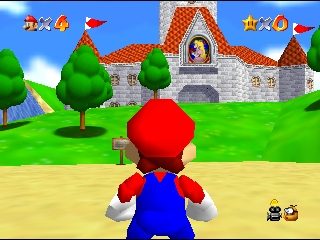