Recruits is a squad based top down shooter that puts players on the front lines of the battlefield to accomplish your missions through any means necessary. Fast paced and pack with explosions, Recruits offers a wide variety of features that allow you, and your friends, to to take command of the action and lead your men to victory.

As players progress through the game they will gain ranks and respect amongst their fellow soldiers, giving them bonus abilities, unlocked items and perks to better defeat their enemies. The main aim for the player is to complete their missions and gain as many kill points as possible. The higher the rank of the player, the more efficient soldier they are, giving the team a better chance of surviving the missions and ultimately the war.

In each level, players will have to move out, saving POW’s and civilians, avoiding traps, searching out and killing Enemy Soldiers, destroying enemy buildings and vehicles in order to safely get extracted from the battlefield.

Recruits is an action packed Top Down Shootem Up that will deliver you and your friends to the front lines of brutal combat situations.

Features:
Fast Action Gameplay:
Action packed shooting, fast paced killing, explosions, booby traps and moral decisions, all make for an exciting and fun gaming experience.
Simple, Fun Controls:
Let the mouse do most of the work. Using either mouse click or WADS to control the squad, right click for your basic weapons and middle click for specials, you have all the fire power you need at your finger tips.
Wide Range of Weapons:
Machine guns, grenades, explosives, melee. Everything your team needs to complete your missions.
Variety of Levels:
From Jungle to Urban, to Snow to Desert. Many war zone will be covered. Destructible objects and interactive elements immerse the player in their environment.
Level Up System:
Level up with ranks, starting off as a low class soldier and working your way up through to Captain and General.
Group Morale
Having a morale system for traumatic events in the game. The more you can help people in missions the more points you gain and the more effective your team is, the more traumatic events you cause or witness and your team start to feel emotionally affected, hindering your performance and risking your chances to survive.
Command your Team:
Having the ability to give basic commands to your team members such as Defend, Attack, Search and ReGroup allows you to tackle all situations.
Special Abilities and Upgrades:
Gain points to level up and earn special abilities and upgrades such as napalm strikes, reinforcements, accuracy upgrades, and much more.
Single Player and Co-Op Multiplayer modes:
A single-player mode puts the player straight into the action and fighting for their country. A multiplayer Co-Op mode puts you and your friends into the war together with survival mode and the ability to replay single player missions. 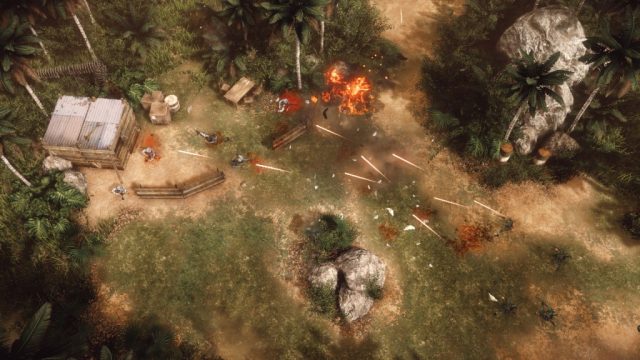