Advent Rising is the first in an epic trilogy of action/adventure games, presented in a stunning cinematic format to deliver an unprecedented variety of game play experiences. Built on the Unreal Warfare engine, it offers precise, refined play-dynamics with action-packed adventure and style, wrapped in a visually imaginative universe. Advent is akin to a fast-paced action movie where the player is swept up in a continuously evolving series of sequences and events.

Working with award-winning science fiction author Orson Scott Card, GlyphX Games has created a gripping storyline that will thrust gamers and readers alike into an incredible intergalactic saga. In Advent Rising, players make decisions that effect not only what they experience in the first game, but the entire Advent trilogy.

novint falcon - only in the Ascension Reborn re-release by Novint.
messiah - Humans are viewed by many of the aliens, except Seekers (who apparently wipe out humanity almost completely), as divine creatures. Gideon, the protagonist, is also apparently one of the most powerful and quickly learns to control his divine powers with guidance from the Aurelians (who can barely lift a cup with similar powers [telekinesis, in this case], while Gideon can lift massive boulders and do other impressive things).
in-game intro - turns into real cinematic later on from whence the "real game" starts.

The game only supports 4:3 resolutions, but curiously displays this letterbox view which tries to simulate widescreen. 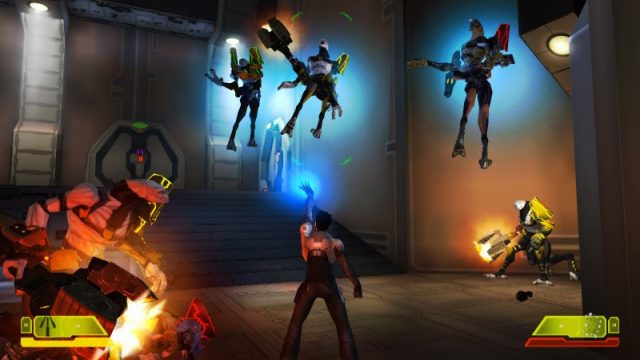