Tags:
The 7th canonical game in the Ultima series and the first game in Ultima's Age of Armageddon. The player and party can use crossbows and bows. Ingredients can be mixed to bake bread and other things. Cheese is available as food. A variety of items can be crafted into other items. There are pumpkin fields in the game, from which pumpkins can be harvested. Flight of the Bumblebee is played at one point, Rule Britannia is overplayed. Unicorns are mentioned in in-game books and by characters
one can be found by the player also.
. But due to the censorship of this game, the role unicorns it reduced. The game and story are so heavily censored that its practically unintelligible.

This is drastically simplified version of the Black Gate, leaving in only some action-adventure kind of game from the original adventure-RPG with nary a dialogue left. This was done due to the limitations of the platform which simply couldn't handle the amount of data in the original.

The game engine itself was rewritten entirely in assembly for the platform, and considering the things left out, it can't be considered the same as Ultima 7 engine. This rewritten engine was re-used in the SNES Savage Empire. 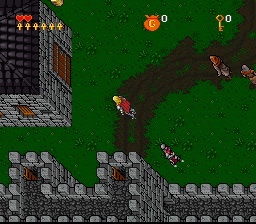