Uses or can use OGL for graphics, a cross-platform and cross-languge (via bindings) API for 2D and 3D graphics originally created by Silicon Graphics, control passed to the non-profit Khronos Group in 2006.

The first video game about OpenGL was released in 1983.

Activision, Spiderweb Software and GarageGames has published most of these games

Note that no OpenGL release is 1:1 comparable to any DirectX release (e.g. OGL3.3 had features that were introduced in DX9 and DX10 separately).

OpenGL 3.0 was supposed to be a long overdue overhaul to the old and problematic state system OGL uses, but this was scrapped and has seemingly not been tried again.

A direct mesa-to-OpenGL chart showing mesa and OpenGL version correlations would be very helpful. However, such a chart is highly improbable. OpenGL support and cards, card features, brands, and types of GPUs are separately the targets of various mesa releases. Also occasional regressions occur on any of the mentioned factors. ie: A new release of mesa can put AMD support at OpenGL 4.5, NVIDIA support at OGL 4.1, and Intel at OGL 4.2 (but without ASTC, a OGL 3 feature; so technically Intel is down to OGL 2.1)

Since OpenGL (and OpenGL ES) is open and there are Open Source libraries for the API, a determined dev can add support to any platform. Such is the case with porting to Amiga 68k or to (YIKES!) FuzixOS . 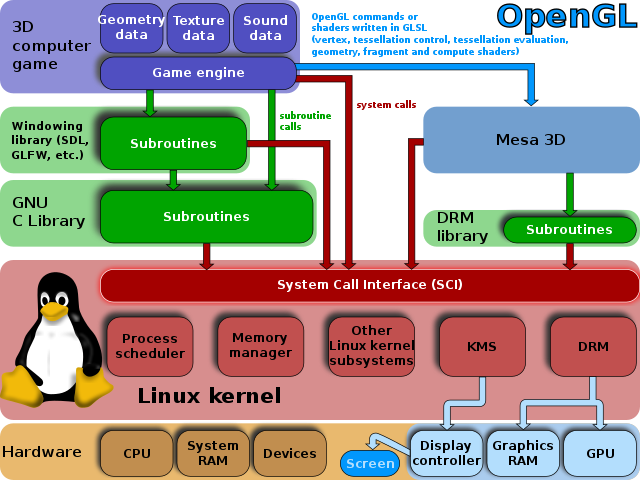