The Legend of Zelda: Majora's Mask

Link must save the world! This time, he finds himself trapped in Termina, an alternate version of Hyrule that is doomed to destruction in just three short days. Link must race to recover the Ocarina of Time (which allows him to manipulate time in multiple ways), defeat challenging bosses in dungeons spread across Termina and discover the key to the mystery of Majora's Mask. Along the way, he'll obtain new weapons and items and help other characters (some strangely familiar) in their everyday lives. In addition, Link must use a wide assortment of masks scattered throughout Termina, each with its own specific use or power. Never before have three days offered so much in the way of action, mind-boggling puzzles and depth. The Legend of Zelda: Majora's Mask is an adventure unlike any other!

Gaiden translates to 'side story'.
Aliens Kidnap Epona! No, really! This game will have Link leaving his home planet and traveling to the moon.
2:48 PST Thursday Sept 02, 1999 (You heard it here first)

Majora's Mask follows Ocarina of Time. The same Link and the same Skull Kid are in both games.
Young Zelda from OoT makes are cameo appearance in a memory of Link from a time following the 'young link ending' of OoT


Tags:
The main protagonist is still a child in this game. All characters go right on living their lives regardless if the Hero of Time sees them or not during the 72 hours this game covers. The Hero can ride Epona. Tingle makes his debut in this game. The Hero once again can shoot bow and arrows. Technically, the antagonist of the game is not from the plant where Hyrule or Termina are. More specifically
A character and many cows are abducted and the character returned corresponding to the appearance of many flying saucers.
Despite the 'Gaiden' moniker, this game follows Ocarina and is a part of the Zelda series.
Perhaps the game makers initially did not want to explore the 'young link ending' to OoT since most previous games took place in the 'old Link vanished ending'. They have since all but abandon the original time line and set most newer Zelda games in the 'young link ending' time line.

emulated by
The Legend of Zelda: Collector's Edition (GameCube)

prequel of
The Legend of Zelda: Twilight Princess (Wii)

sequel of
The Legend of Zelda: Ocarina of Time (N64) 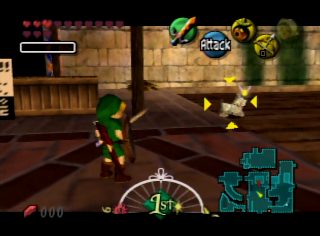