Lewis Carroll's 19th-century fantasy has been reinvented many times, most famously by Walt Disney. And now American McGee, one of the designers behind the Quake and Doom series, issues his addition to the Looking Glass legends with American McGee's Alice. Players take on the role of a wiser, more industrious heroine who sets out in this third-person 3-D action game to free Wonderland from the tyranny of the Queen of Hearts. Alice will confront a host of weird creatures in surreal settings and solve numerous puzzles through more than 15 levels of gameplay.

When Alice responds to a mysterious summons to return to Wonderland, the place is barely recognisable. Something has gone very wrong. Undaunted by the diseased atmosphere, confusion and mortal danger that surrounds her, Alice commits to set it right. Embark on a twisted journey to save a wonderland gone bad... but be warned if you're gonna chase this rabbit - you'd best go rmed...

* Stunning third-person, 3D action on an enhanced version of Quake III technlogy.
* A living breathing Wonderland that is as deadly as it's inhabitants.
* Twisted renditions of characters from the original Alice Adventures.
* Defend yourself with a collection of the most deadly toys ever imagined.
* Solve devious puzzles and labyrinthine mazes.
* Battle sadistic card guards, demonic fire imps, ravenous jabberspawn and many more.
* Hugely atmospheric score composed specifically for the game by Chris Vrenna founder member of the Nine Inch Nails.

stock sounds — at least one is heard in an early surreal level where a huge door frame passes around the level (it does this pass repeatedly), the sound is played during the pass.

Sanguine # 2008-11-09 21:31:11
May (quite likely actually) fail to start up on XP and newer operating systems (as it does for me), but works fine after you use a No-CD crack. Yet another woeful bit of evidence that hardware-based copy protection schemes truly are evil.

There's a Matrox GPU-specific patch (2001-01) and subtitle patch for Dutch release available (2002?), but these offer no real benefits for others.

Sanguine # 2008-11-09 15:41:00
A rather bizarre, if cleverly different, game loosely based on 'Alice in Wonderland' and 'Through the Looking Glass', but with black and macabre twists, the knife-wielding Alice was far from Carroll's original interpretation. 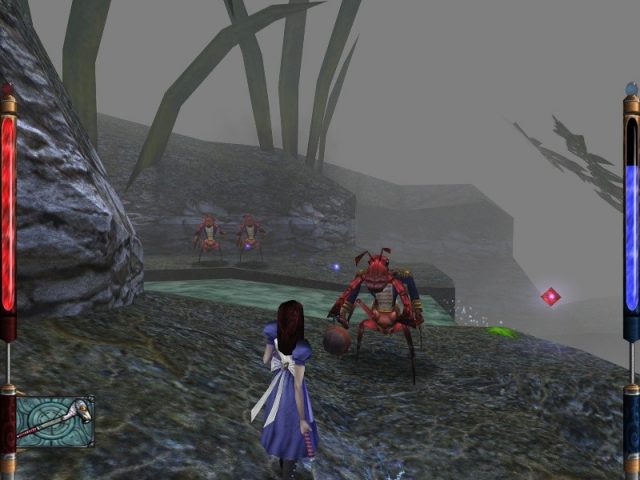