from another world - you're actually native, but was transported as an infant into another world where you grew up, and now you've returned to bring your royal boot to the Face of Evil.
unrestricted violence - player can freely kill the slaves as much as the orcish monsters.

Interplay provides a version of this game to download from battle.net. Comes packaged for play on Windows using DOSbox or an alternative package for Mac using DOSbox. The executable zip file is encrypted preventing it from being run on non-windows systems without using Windows emulation. Once installed, the game should theoretically work on DOS, FreeDOS, or most any system DOSbox runs on. However, Blackthorne's the setup executable is not included making sound configuration especially problematic. This game is not Freeware. Blizzard retains full copyright and the downloaded version includes and EULA restating Blizzard's ownership. No right to redistribute or otherwise treat this version as Freeware is granted by Blizzard. 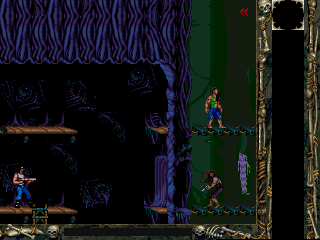