In Dr. Sidney Ruttleberg's old, decaying mansion, a boy and his dog stumble upon a mysterious machine. By sheer accident they are propelled into Evermore, a one-time utopia that now has become a confounding and deadly world. A world of prehistoric jungles, ancient civilizations, medieval kingdoms and futuristic cities. During his odyssey, the boy must master a variety of weapons, learn to harness the forces of alchemy, and make powerful allies to battle Evermore's diabolical monsters. What's more, his dog masters shape-changing to aid the quest. But even if they can muster enough skill and courage, even if they can uncover the mysterious clues, they can only find their way home by discovering the Secret of Evermore.

video games — the world of Evermore was originally a "video game" itself, but something apparently went wrong and became a reality of its own (based on the description in Wikipedia)

Sanguine # 2008-09-07 18:25:16
Secret of Evermore has a really involving story but is definitely directed towards a younger audience. The gameplay is almost completely the same as the Secret of Mana series, but the one thing that truly stands out about this game is the Alchemy system in which the spells you learn take ingredients for you to cast them, making the challenge level a lot better than games like FF3, where your characters basically become gods(at least in my opinion).

# 2006
Decent RPG. If you want to play this game with your buddy in 2 player mode like Secret of Mana, you can do so by getting FuSoYa's patch:
fusoya.panicus.org/

Late in the game the hero fights a boss named Coleoptera which is a palette swap of the first boss Thraxx (see the package shot for a drawing of that boss). Thraxx is probably a corruption of the word thorax, whereas Coleoptera is the scientific name of the order of beetles. The boss that goes by that name bears however no resemblance to a beetle at all. The literal meaning of the word Coleoptera does not make much sense either, as "coleo" comes from ancient greek κολεός (koleos) which means sheath and "ptera" from πτερόν (pteron) which means wing, referring to the chitinized front wings (elytra) which are characteristic for beetles and serve as a protection ("sheath") for the hind wings. Coleoptera from Secret of Evermore has no wings however.

leszy # 2014-10-26 14:25:49
When waiting a long time on the "The End" screen another screen appears which credits Brian Fehdrau for Dolly Grip. In movie production the Dolly Grip is responsible for operating the camera dolly. Brian Fehdrau revealed that he added that message for his wife Dolly. 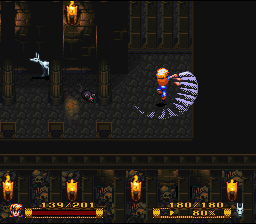