Several years have passed since Kyle avenged his father's death and saved the Valley of the Jedi from Jerec and his band of Dark Jedi. Allowing his Force powers to languish for fear of falling to the Dark side, Kyle set aside his lightsaber, vowing never to use it again. But when a new and menacing threat to the galaxy emerges, Kyle knows he must reclaim his past in order to save his future.

Star Wars Jedi Knight II: Jedi Outcast is being developed in partnership with Activision's critically acclaimed developer Raven Software. Players assume the role of Kyle as they employ a unique mix of weapons, Force powers and your lightsaber in both single- and multiplayer modes.

* Expanded and enhanced use of the lightsaber features a slew of attack and defense moves
* Tap into the powers of the Force including Jump, Push, Jedi Mind Tricks and more
* Employ combat or stealth, depending on the situation. When a fight is necessary, be at the ready with an arsenal of weapons: stun baton, Bryar blast pistol, blaster rifle to name but a few
* Explore breathtaking Star Wars locales--Cloud City, the Jedi Academy on Yavin 4, Nar Shaddaa, the smugglers' moon--plus some never-before-seen locations
* Multi-player options including, deathmatch, saber-only deathmatch, and team capture the flag
* Developed in conjunction with the critically acclaimed Raven Software using a modified Quake III Team Arena engine

The game has an extra stage for the demo, that is kind of well made and replayable (outstanding in demo standards) 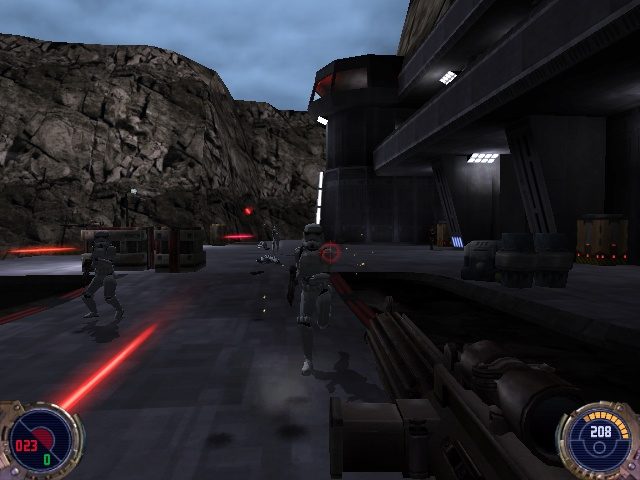