Had an expansion called The Deeper Dungeons in 1997-11 which added 15 new levels, improved AI and possibly something else.

The original and the expansion were re-released as Dungeon Keeper - Gold Edition with patches, level editor and other improvements and toys, which were later made available for all on Bullfrog's website.

has this clone
Dungeon Digger (Linux) 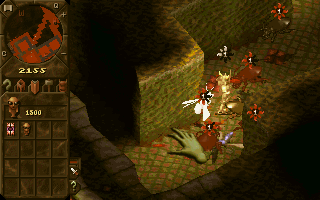