prejudice — most notably in the first level when you play as young Witch-boy. The name is obviously derogatory and many of the adults remark on your odd looks and the other kids actively bully you (though you bully back).
suppression — any town in your or Glorious Empire's control. Your mind control of the populace is more effective, but the peasants apparently retain their ability to speak with their own mind (which usually involves their poor treatment), they're simply forced to work rather than being controlled absolutely.
unusual protagonist — human(?) with magic abilities is apparently quite rare, though his skin is also blue and tattooed by nature with glowing eyes and other features that make him look evil. Likely the reason he's called Witch-boy even from early childhood.
possession — occasionally you get to possess one of your minions so you can direct them in places where your "Imposing Presence" can't quite fit.

--- not applicable (explanations for "why not?")
Children - only encountered during growing phase.

--- notes
* Unlike in the original Overlord game, the protagonist is quite useful in melee combat. You actually deal damage faster than any of your minions to single enemies and large masses, this was reversed in the original where you could barely do anything useful without your minions (besides throwing magic at them).

Note! The internet multiplayer is accomplished solely through a matchmaking service, so you CAN'T play multiplayer online with anyone specific you might want to (fox example, your friends).. 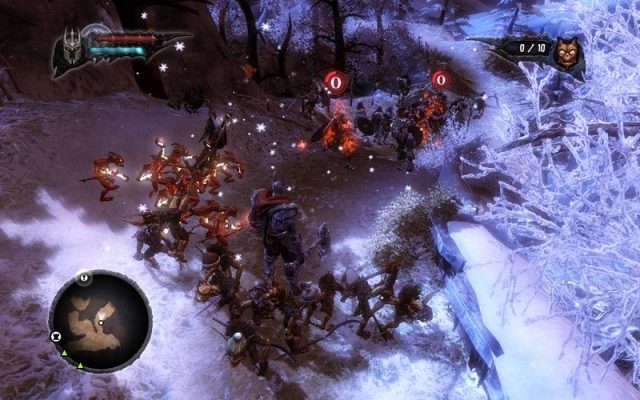 In a heated battle