What if history was not supposed to play out the way it has? What if people from the future are playing with us; making us do the things to make the future world a ‘better place' - what is a ‘better place' anyway? Should History ever be changed, even the most traumatic times? Doesn't History shape who we are?

In Darkest of Days, you get to experience some of the most varied gameplay ever released in one title. Things will never get stale as you travel to distant times, and fight alongside people from that time period. Fighting in Antietam (the bloodiest day of the American Civil War) feels much different than fighting on the side of the Russians at Tannenberg (where the Russians withstood 140,000 casualties in WW I).

* Fight In FIVE Distinct Different Time Periods
Whether its in Pompeii, Antietam, WW I, or two other unannounced time periods, you will fight with weapons of the time period. You will fight against enemies that fight in different ways, all reflective of how fighting was done at that time.

* Participate In EPIC Battle Scenes
. .* You will fight against the Confederates (and the Union at times), facing a staggering number of troops, all fighting in unison. Ready, aim . . . steady men . . . FIRE!
. .* You will jump from the trenches in WW I to lead an attack against the Huns. You will man artillery to hit distant targets. You will defend to the last man!
. .* You will Fight in Pompeii, while Mt. Vesuvius is spewing ash and fire into the atmosphere. You will fight amongst a frightened population, fleeing for their lives.

* Play From Opposing Sides Of Conflicts
Nearly every time-period offers game-play from each side of the conflict. In trying to keep History pure, you have to undo mistakes you make, which may require fighting from the other perspective to ‘mend'.

* Unleash Hell With Futuristic Weaponry
What could you have done with a automatic rifle during the Civil War, or some futuristic laser sighted pulse cannon in the Trenches of WW I? There are times where you have no other choice but to bust out the big guns. 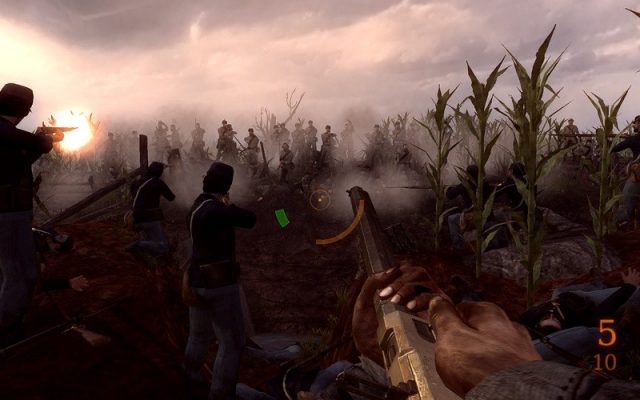