Gameplay
For the most part it was fun, the levels were extremely small except for the vast expanses of nothing in some places. Fighting medium sized Akrid was especially fun when you didn't have a VS warming your buttocks. The largest variety were just tedious, especially the giant worm that I just avoided after trying to kill it for the fourtieth time (really, are all console games (Lost Planet is console game first and foremost) about repeating the same boss battle for half the whole playing time?) The best parts of the game were usually outdoors, indoors being mostly dull corridors or large halls (cities?) where you're most of the time stomping around with your VS. You seem to play most of the time in VS indoors and as Wayne outdoors, which is kinda funny since anyone with half-a-mind would expect this to be the otherway around. Caves were a bit of an exception for this, but caves are caves. Fighting NEVEC was the part I hated most, and it was the least sensical of it all.

Controls
Since I can configure them as I see fit, I can't really give an opinion on how good they were or not. Everything I could think of had separate button for it and nothing else. The only gripe I have is that the control instructions for the VS (there's two special buttons for VS) had this huge X360 controller showing how to use the different things on it. The problem is, I was playing with keyboard and mouse, and I had to learn them by trial and error since I couldn't make connections between the xbox controller config and my keyboard and mouse configuration (What were they thinking? That everyone has innate understanding of X360 controllers? Or even have them? I'm playing the game on PC so it's far more likely I have a keyboard and mouse in front of me than that blasted thing between my thumbs). Everything worked out well in the end, since trial-and-error works well usually. There were some issues of the controls not being responsive, or there were several different actions made to happen from the same button (only for some VS, not when running around naked with Wayne, our protagonist), this was the most obvious in the final boss battle.

Story
During the cut-scenes, I constantly got this nagging feeling that I've missed part of the story somewhere, but I couldn't figure out where. So it was greatly disjointed and oddly hurried. Quality wise the beginning started nicely, but degraded seriously over time and it was not much of a help that you had the feeling that there's parts of the story missing. The characters weren't developed much, but I don't think that was necessary, and even their own background info was only to clarify why they were there in the first place and nudge the plot forward a bit in a bit awkward manner. Of course there was also the "must" romantic affair, too. Also, the characters were awfully stereotypical, but since the game was so short, there was little chance of them being much else. There was also this strange part that you were alone running through every single Akrid hive and NEVEC base to get to some distant location while your friends lazily used alternative route on their huge ass truck / mobile base, until you joined them at the destinaton. This was never even explained, and in some cases where there was some reason to do it, they could've hauled you closer to the final target before letting you off running and gunning everything in sight. And finally, the ending was disappointing, but sadly this is the norm for almost anything except books.

Major gripes
The game suffers from the usual console game features: ridiculously over-powered boss fights compared to everything else and all too linear story/gameplay. Thermal energy meter gave nothing but another reason to die suddenly when you just happen to use some energy based weapon too much or take too many whacks to your head (Wayne regenerates to full health in seconds by taking a large dose out of your energy reserves). Really, it's just a health reserve that keeps draining itself slowly and sometimes faster (I couldn't figure out what this was based on, some articles have said it's based on the temperature of the surroundings, but that should've meant it shouldn't drop at all or maybe even increase when around volcanic actiivity, lava flow or a smelting pool in some factory). The only thing I did notice to actually cause difference was the use of energy weapons and the special abilities of the VS. Honestly speaking, the game went downhill sometime around the middle of the game when you started fighting NEVEC as much or even more than the Akrid.

Summary
Overall, I'll give it 2 out of 5. The game's emphasis is on graphics, besides that it is horribly lacking.

ON A LOST PLANET FIGHT FOR SURVIVAL, HUNT FOR REVENGE

Your memory lies in pieces, like shattered glass... Green Eye... your father... lying dead on the ground. These memories continue to haunt your steps. But now is not the time for quiet contemplation. The Akrid are attacking! It's time to put it al on the line, avenge your father and save the tattered remnants of humanity. Find Thermal Energy, destroy the Akrid menace. On a lost planet, your destiny will unfold...

Extreme conditions
Battle enemies and the environment. Conserve heat from enemy bodies and keep killing, before your temperature drops.

Band together
Beyond the 12 epic single-player missions, take the battle for survival online with unique 16-player multi-player action.

dying - Thermal Energy (T-ENG) functions as both the protagonist's health as their capacity for surviving in the cold environment, whenever they're not in a VS or indoors (which is rare) their T-ENG rapidbly drains. On "extreme" difficulty this seems to drain regardless.
undefined healing - the T-ENG reserves are depleted to restore health automatically, no T-ENG means no healing. T-ENG is gained from destroyed Akrid and from the remains of any object that managed to explode, except for grenades, rockets and your piloted VS. 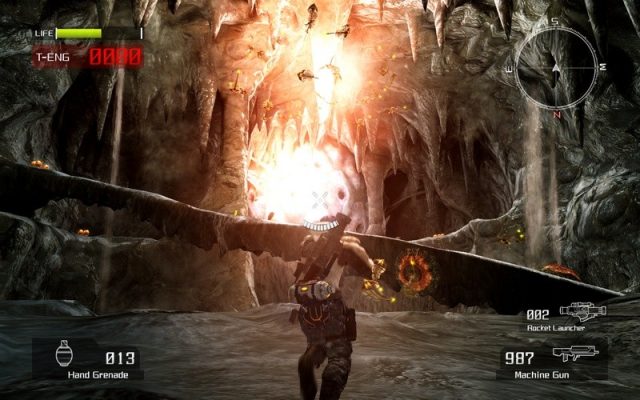