The 1st expansion of Dawn of War II, brings Chaos to the mix, along with a few additions.

Your Blood Ravens have saved the sector, but can they save themselves?

In THQ Inc. and Relic Entertainment’s sequel to the acclaimed Dawn of War II real time strategy franchise, you return to sub sector Aurelia where a long lost frozen ice planet has reappeared from the Warp, bringing with it new secrets to uncover and foes to face.

In Dawn of War II: Chaos Rising you will take command of the Blood Ravens and defend the sector against the Chaos Space Marines of the Black Legion. Purge the chaos filth and hold the chapter together as traitorous forces work from within to try bring down the Blood Ravens.

* New Single Player Missions – Continue your fight against the enemies of the Emperor and use your squads’ wargear, abilities, and experience to battle Chaos in 15 new missions
* New environment and Multiplayer Maps – New ice planet graphics set will increase the visual diversity and adds 7 new PVP maps
* Aspire to Glory – Build your existing squads up to level 30 and unlock even more devastating abilities
* Chaos Corruption Mechanic – New single player mechanic allows you to equip incredibly powerful equipment that corrupts your squad and will guide the story towards or away from the corrupting influence of Chaos
* New Multiplayer Race – Swear loyalty to the Chaos Gods and play as the bloodthirsty Chaos Space Marines in multiplayer battles against both Chaos Rising and Dawn of War II owners
* New Units – New units for the Space Marines, Ork, Eldar, and Tyranid armies in multiplayer.
* 2 New Last Stand Heroes – Face off against the relentless horde as either the Chaos Sorceror or Tyranid Hive Tyrant 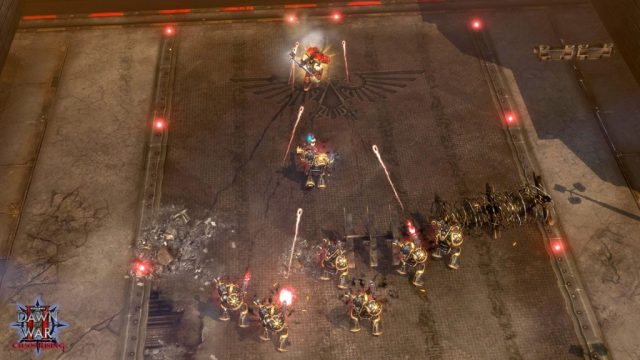