Id Software and Raven Software joined forces again to expand the Heretic and HeXen universe in a bold new direction. Powered by the Quake engine, HeXen II was developed from 1996 to 1997 on a brutal production schedule, published by Id Software and distributed by Activision Inc.

One of the most highly anticipated releases of 1997, HeXen II was the first game from an outside developer to ship with Quake engine technology. The game featured four single player hubs and deathmatch capabilities for 16 players while simultaneously offering four character classes, each with four weapons with dual fire modes for a total of 32 unique weapon effects. In addition, HeXen II was the first 3-D shooter to feature transparent water effects in both hardware and software rendering modes and one of the only fully 3-D games to feature single player cooperative gameplay.

HeXen II was a smash hit for Raven Software and was revered by many as one of the most artistically beautiful computer games ever made.

this is the only game aside from Quake that I know of that uses Quake 1's engine. It is a very worthy sequil of the original Hexen. This one takes you to yet another world to battle the third and final Serpent Rider as one of four heros (Paladin, Crusader, Assassin or Necromancer). The graphics are wonderful, espically the use of colors and the amazingly detailed maps. This is the game Quake should have been.

Note: I personally found the game ran best with 192 MB RAM total or more, as at 128 MB it occasionally stopped to load new data in some certain "load spots". 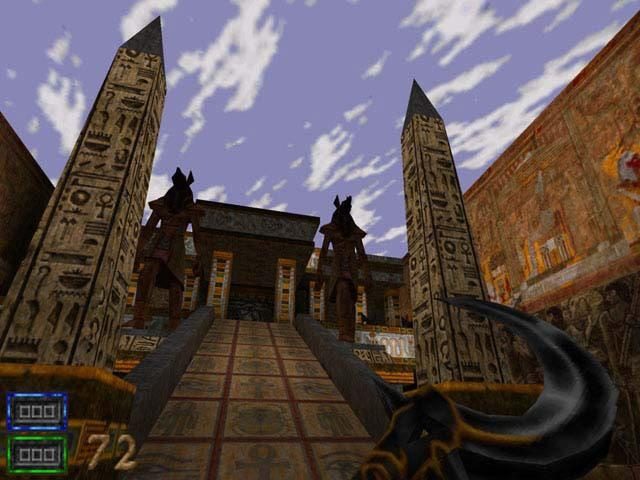