The Dark Heart of Uukrul

This game has some interactive fiction, adventure and not yet defined elements. Players can visually search the room or listen find secrets, to get descriptions of the room, find riddles that hint at solutions to puzzles, and/or find clues to events in the nearby area. These are returned as text as the game has no sound whatsoever.

Advancement must be confirmed by player actions. Crosses are not just symbols in this game, they are apparently melee weapons. Equipment can require a minimum level of experience and/or a minimum character attribute. Clerics must pray to cast spells (all one action). The petitioned god can grant the cast, not answer, or punish the character. These random responses seem to be based on the character's previous actions but the mechanism is unclear.

The game is automatically saved much the same way as typical rogue-likes but a bit less often. Simply walking from one place to the next does not prompt a save, but reading a clue or resolving an encounter does. There is also a game "backup" save system. When a player is in a "sanctuary" they may manually create a second save.

Experience is shared but most of it distributed unequally based on a character's participation. The mechanism is unclear. Killing blows and attacks delivering significant damage have the most reward. Other actions are rewarded as well no mater what the result. Every character still gets something even if they did not interact with the battle at all. For example, if the first move of a battle is the player's fighter killing a single foe with a single blow, all other party members will get at least 1 XP or more for a stronger enemey.

If a character sacrifices their life to save their fellows, they lose piety. Dying is heresy, how Oranic¡

version of
The Dark Heart of Uukrul (Apple II E) 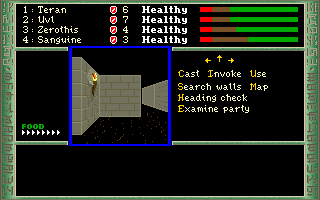