Company of Heroes : Opposing Fronts is the next chapter in the groundbreaking real-time strategy franchise from critically acclaimed studio Relic Entertainment. This standalone game features two unique armies with full length campaigns. Players will experience fast-paced dynamic tactics like never before, in two of the most brutal World War II campaigns ever fought. Take command of the tenacious British 2nd Army in the vicious battle for Caen, France, or lead the German Panzer Elite as they struggle to repel the largest airborne invasion in history.

Introduces two new armies, the British 2nd and the German Panzer Elite, both with their own all new campaigns, too.

British are slow-moving and highly defensive army and apparently has movable base unlike all the other armies, as well as tank airdrop and many other interesting and unique abilities.

Panzer Elite on the other hand is a low number force of, you know, elite forces who're more suited for rushing the enemy in Blitzkrieg tactics and specializes on vehicular combat more than any other army.

Apparently You won't need to have Opposing Fronts to play against their armies after a new patch is rolled out for the original game, although you won't be able to play _as_ either of the new armies if you don't get the expansion, nor likely are you able to play the two old armies if you don't have the original, but you can still play against those who either have only the expansion or only the original even if you only have the other.

has this MOD
Company of Heroes: Eastern Front (Windows)

expansion of
Company of Heroes (Windows) 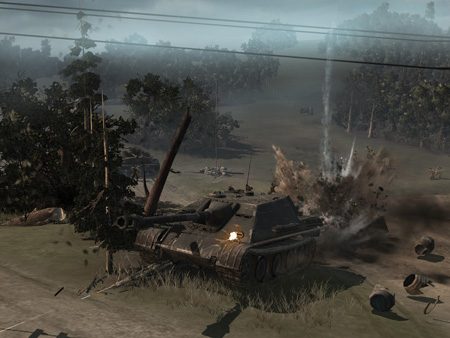