A fantasy medieval themed MORPG with a set of races and classes similar to angband and nethack. There are multiple graphical clients to chose from that will show more information than text based clients (stacks of objects on the floor for instance). Use of text remains heavy in all clients and more closely follows a the example of text adventure interpreters than simple commands. Players will need to converse with NPCs. But many typed commands are simple as well and players can bind any command to a keystroke. Also, there are a variety of shortcuts that can be preformed with the mouse. The adventures provided really depend on which server the player chooses to play on. Most servers allow multiple characters and they remain attached to the server where they were created. Initially there was no gender option provided but version 1.10 added this option. Many servers continue to use the monogender mode. Generally servers include a tutorial map, several interlinked preset maps, and attached maps that are randomly generated within a set or constrictions (themed dungeons). Players find a public bed (or buy their own real estate to place a bed in) to sleep until they want to return to the game, which is a quit-save. Any items they left lying around may be stolen, but their inventory and their character are safe when sleeping. A variety of locked storage, security systems, guard animals, or guard NPCs are available for things that just won't fit into inventory. Maid NPCs are also an option. Player vs player is decided per server. The game allows for servers to have PvP zones and for players to mutually agree to PvP (outside of zones). But absolute prevention of PvP is apparently technically impossible for anyone determined to circumvent the safeguards as sings repeatedly warn players that PvP is forbidden in places where technical limitation are already in place. There is an extensive skills system as well. Skills increase by using them. For instance, read a book that is within your literacy skill level and you will ear literacy experience points. This only works once per book, btw. There is no combat mode. Attacks are in real time. While characters can have all manor of attacks at their disposal, all melee attacks are done without visual feedback. Text feedback is given instead. Ranged attacks show the projectile, but are otherwise identical to each other as melee attacks are.

For POSIX/X11 and/or GTK systems. Confirmed to run on Ubuntu and IRIX. RPM available. 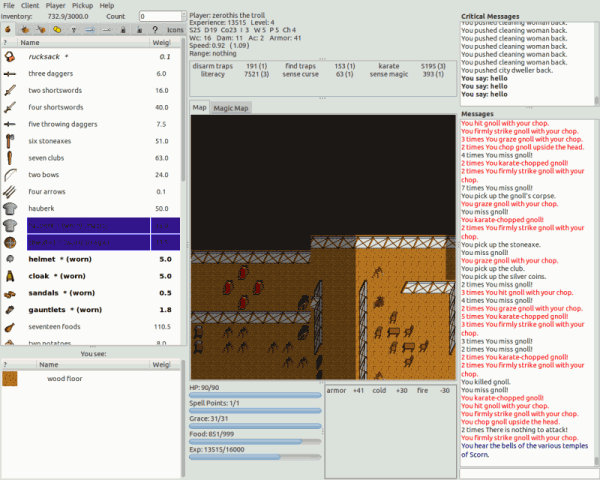