Killing Floor is a Co-op Survival Horror FPS taking place in the devastated cities and countryside of England, after a series of cloning experiments for the military goes horribly wrong. You and your friends are members of the military, dropped into these locations with a simple mission: survive long enough to cleanse the area of the failed experiments. The only problem is, these "experiments" aren’t waiting to be taken out – they’re coming for YOU!

Key features:
* Co-op game mode for up to six players obliterating multiple waves of specimens
* Persistent Perks system, allowing players to convert their in-game achievements into permanent improvements to their character’s skills and abilities
* Over 40 Steam Achievements, including "Dignity for the dead" for killing 10 enemies feeding on dead teammates’ corpses and * "Hot Cross Fun" for finishing off 25 burning enemies with a Crossbow.
* Watch those crucial and violent creature deaths in slomo "ZEDtime", even in multiplayer
* Solo game mode for offline play
* 9 different monster types trying to eat your face off, armed with everything from teeth and claws, through to chainsaws, chainguns and rocket-launchers
* 12+ weapons for the players to chose from, ranging from knives and fire-axes up to pump shotguns, rifles and a flamethrower
* Add in a welder, medical tools and body armor to help the players survive
* Players choose which Perks to play with, so they can best balance out a co-op team to survive the horrors
* Open, non-linear play areas: choose when and where to fight – or run; weld doors closed to try and direct the monster horde
* Fully-configurable, allowing players to change things as simple as the difficulty level or number of creature waves, or go so far as to set up their own favorite waves of monsters
* Support for Steam Friends and other Steamworks features
* Includes SDK for the creation of new levels and mods 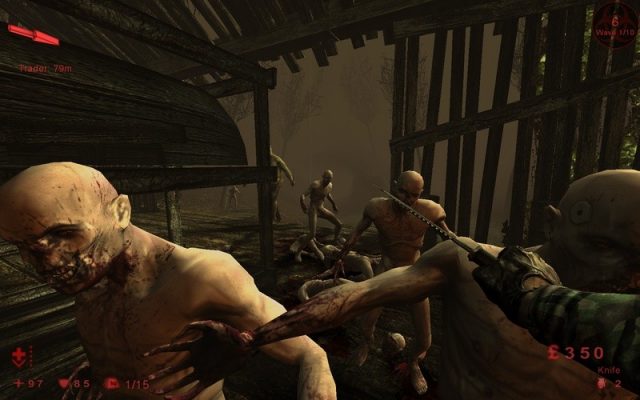 Fending off Clots with a knife.