With a moody and almost grimterror atmosphere and lore that would make even H.P.Lovecraft shiver a little, a simple but very customizable character development and a gameplay that is hard and "unfair", bringing back the "trial and error" progress system of classical arcade games, this game is simply a jewel of RPG-action goodness.

Sadly, this version is a poorly done port from the console version, almost forcing to be played by handheld control (keyboard + mouse is horribly designed and also missing keybinding for some actions), and the camera feels clunky, slow and very dependant of player panning/autolock.

Dark Souls is an upcoming action role-playing game from the developers who brought you Demon’s Souls, FromSoftware. Dark Souls will have many familiar features: A dark fantasy universe, tense dungeon crawling, fearsome enemy encounters and unique online interactions. Dark Souls is a spiritual successor to Demon’s, not a sequel. Prepare for a new, despair-inducing world, with a vast, fully-explorable horizon and vertically-oriented landforms. Prepare for a new, mysterious story, centered around the King’s Crowns and the original, now dying flame at the center of the world. But most of all, prepare to die. You will face countless murderous traps, countless darkly grotesque monsters and several gargantuan, supremely powerful demons and dragons. You must learn from death to persist through this unforgiving world. And you aren’t alone. Dark Souls allows the spirits of other players to show up in your world, so you can learn from their deaths and they can learn from yours. New to Dark Souls is Beacon Fire, where you can share the experiences of your adventure with the spirits of other players. Around the Beacon Fire, you may find the only warmth and calm that exists in this dark world. Beware: There is no place in Dark Souls that is truly safe. With days of game play and an even more punishing difficulty level, Dark Souls will be the most deeply challenging game you play this year. Can you live through a million deaths and earn your legacy?

New Content
Dark Souls: Prepare to Die Edition will include an untold chapter in the world of Lordran where the player must stop the spread of darkness at all costs by facing and defeating the Dark Knight Artorias.

Key features:
* Extremely Deep, Dark & Difficult – Unforgiving in its punishment, yet rewarding for the determined – learn to strategize freely and conquer seemingly impossible challenges.
* Fully Seamless World – Explore a completely integrated world of dark fantasy where dungeons are seamlessly intertwined, with great height.
* Mastery Earns Progression – Contains 60 hours of gameplay, with nearly 100 uniquely despair‐inducing monsters & an incredibly nuanced weaponry & magic spells system. Player success depends on their eventual mastery of how and when to use the magic spells, choice of armor, the number of weapons, the types of weapons, and the moves attached to the weapons.
* Network Play – Players may cross paths with one another, interacting with each other throughout the game even as each player plays their own game.
* Flexible Character Development & Role Play – As the player progresses, they must carefully choose which of their character’s abilities to enhance as this will determine their progression style.
* Community – See other real players and empathize with their journey, learn from seeing how others died, find and leave messages for your fellow players; helping them or leading them into death.
* Symbolic of Life & Hope – The Beacon Fire is an important feature of Dark Souls for many reasons. Though in gameplay it serves as a recovery and re‐spawn point for players whose health gets low and is the one place in the dark world where players can find a fleeting moment of warmth and calm.

The game's story is about the waning Age of Fire which the player can help continue or end, the waning of the age also is the cause of the undead curse when Gwyn kindled the First Flame with his essence. Letting the Age of Fire end would bring about Age of Dark (a.k.a. Age of Humanity), but considering how Dark Souls (a.k.a. human souls) are prone to bad things and generally the world's bleak presentation of humans, this would probably be about as bad thing as the previous age or worse.

How bad humans and Dark Souls are or can be is especially shown in Artorias of the Abyss expansion (which is included in the Windows port of the game), though the information gained there can be somewhat misleading. The Abyss appeared because the pygmy went insane, not because it was natural thing to happen with Dark Souls, and the Abyss corrupted Artorias and the Oolacile. Many players seem to assume this is the natural progression for what happens with Dark Souls unfortunately. 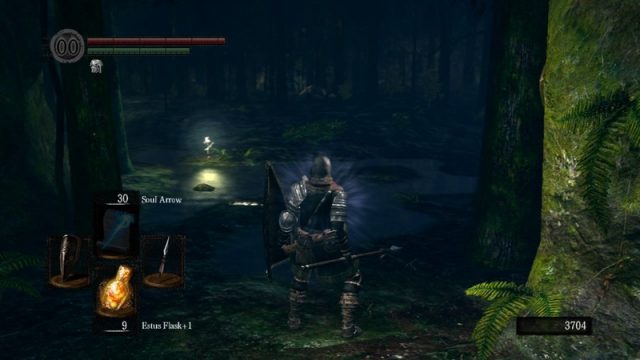