A New Wizardry for a New Generation

Wizardry 8 raises the standard for fantasy role-playing with a vengeance. Prepare yourself for a new level of excitement, immersiveness, and depth that made role-playing games one of the best-selling, best loved genres of all time. This is the legacy of Wizardry 8. Acllaimed critics agree!

* Explore a vast 3D world filled with action, magic, and adventure. Wander through dark dungeons, lush landscapes, scorrching volcanoes, and even beneath the sea.
* Create your own custom party of adventurers. Make a gnome gadgeteer, a lizardman figher, a rawulf lord, or even a faerie ninja. The possibilities are endless!
* Choose a custom personality for each character and hear them speak over 100 lines of dialogue. Kindly or chaotic, burly or surly - how your characters act is up to you.
* Talk to dozens of intelligent characters. How you treat them determines whether they become powerful allies or deadly enemies.
* Battle over 300 types of monsters in some of the most intense combat ever seen in a RPG. The unique auto-targeting system makes combat easy to learn, while the huge number of strategies adds unprecedented depth.
* Advanced creature A.I. brings a new level of realism to RPGs. You don't just hunt the monsters - the roaming monsters hunt you.
* Cast over 100 spells using a unique power-level system that guarantees that no spell ever becomes obsolete.

Wizardry 8 is an epic fantasy RPG that picks up where [[gameid:42564 Wizardry 7: Crusaders of the Dark Savant]] left off. You may recall that all hell had broken loose at the end of Wizardry 7. The Dark Savant had taken flight with a device called the Astral Dominae, an incredibly powerful artifact containing the secret of life itself. Following him are two powerful races, the T'Rang and the Umpani, as well as your own brave party of adventurers. Everyone is headed to Dominus, a world on the cusp of the Cosmic Circle, birthplace of the Astral Dominae and home of the Cosmic Lords. Many paths will converge on Dominus, and many long-hidden secrets will be revealed.

Aliens: (in addition to the playable species)
* Umpani (rhino-like humanoids)
* T'Rang (insectoids)
* Rattkin (ratmen)
... and whatever the Dark Savant is.

Sanguine # 2009-08-23 14:47:57
ignorant protagonist - the 6 original party members have little understanding of technology or even basic astronomy. The game intro establishes that you're seemingly some extremely primitive people compared to others in your homeworld (they had spacecraft there as well), several comments during game deepens your understanding of how ignorant they really are and makes them seem almost pitiable. It also makes you wonder what strike of genius did the Mook have when they decided You were good choice as bodyguards. 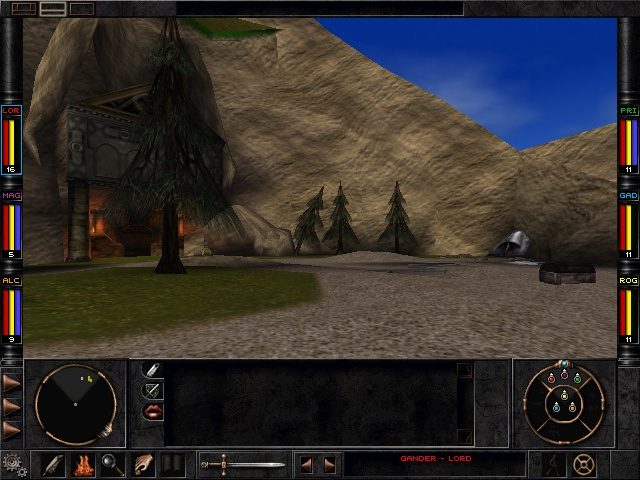