A great RPG where the AD&D world is perfectly reproduced.
A huge world to explore and wonderful graphics are the main reasons to try it out.

An attempt to perfectly reproduce the AD&D ruleset in a significant area of the AD&D world.
Up to 6 players can cooperate using TCP/IP, IPX, 1 player, 2 player, 3 player, 4 player, 5 player, or 6 player cooperative.
serial or modem connections.
The standard edition comes on no less than 5 CDs, The DVD edition contains the entire game on 1 DVD.

Tags
Uses the AD&D ruleset. is set in Forgotten realms where Baldur's Gate is a location. This game begins the Baldur's Gate series. Players can create and name Human, Elf, Dwarf, Half-Elf, Halfling, and Gnome characters of either gender of the Fighter, Mage, Thief, Cleric, Ranger, Druid, or Paladin classes. Some classes can engage in sorcery according to the AD&D ruleset. Players can also dual-class or multi-class according the AD&D ruleset. In a 1-player game, the player controls an entire party, in multiplayer games, each player can control one or more characters (or none at all). Players must cooperate, there is no competitive options in the game. There are multiple ways for a character to summon underlings for temporary help. Characters must sleep or suffer the effects of fatigued. Characters can also become poisoned, confused,charmed, enfeebled, paralyzed, turned to stone, encumbered, impaired, or drunk if the character does avoid situations that lead to such effects. The detail of the fantasy world this game takes place in seems to qualify it as belonging to the high fantasy genre. Characters can use bows, crossbows, slings, knives, swords, axes, bludgeons, pole arms, whips, or fight unarmed (non-lethal). A vast number of items can be aquired from stashes in the world, on defeated foes, or purchased from shops or individuals. The AI of the player's characters can be programmed in a scriptable language. But this is highly optional as adequate AIs are provided or the player can pause constantly to direct everybody with point-n-click commands; then unpause for as long as those commands are helpfully being executed. (Documentation for Scripting can be found on the 1st CD. Users have created AIs that can be found online and loaded into an existing game). Many NPC can be joined to the party and left to retrieve later. Some will leave if they are unhappy with the main characters actions. Evil people prefer the main character to do evil, good characters prefer good. Some NPC have their on purposes for joining and will stay of leave depending on the changing conditions matching their goals or not. The experience system follows the AD&D ruleset. This includes XP awarded for defeating enemies and for completing quests (which are documented on-the-fly in an automated journal that also records some plot information). The XP required to level up are preset according the the AD&D ruleset. When leveling up (at the players initiation, once the require XP are collected), skill points are awarded that can be distributed to a subset of skills available to the character's class (not all AD&D skills are included in this game). Several small village/towns can be visited and Baldur's Gate is a massive 10+ levels (not counting interiors that include multistory buildings) of civilization that approaches the definition of a city. Several large keeps make up whole levels (again not counting interiors that include multistory buildings). Several tall towers can be explored. Many multilevel mines and dungeons can or must be explored. Developers comments can be read on some tombstones a cemetery.
Bauldur's Gate has a sewer system as a location.
. Books, scrolls, and documents in the game offer extraneous details about the Forgotten Realms and Bauldur's Gate area, plot background, plot information, and character advancement training (rare). This game is available in a 5 CD set (original), 3 CD set, or on a single DVD to save on disc swapping. The game can be configured to run from the various CD or have them installed to hard drive per CD. But, upon running the game will require CD 1 to be in the drive for copy egest.
The plot shares some similarities to events in the Book of The Watchers (from the Book of Enoch, an apocryphal Jewish writing). In Baldur's Gate, an unearthly being came to the earthly realm and copulated with mortal females. The children of these unions have unusual and advanced traits and eventual fight with and kill each other. In the book of the watchers, unearthly beings came to the earth and copulated with mortal females. The children of these unions are giants and eventually fight with and kill each other.

This game can be played on HaikuOS using the GemRB replacement engine.

zerothis # 2012-05-05 00:01:17
companion - the familiar, if the player chooses a mage class (no other mages are allowed to have familiars for some reason).
prophecy - in Candlekeep the chanters speak the prophecies of Alaundo.

--- averted (not worth tagging)
autoregen - characters with abnormally high constitution regenerate health automatically (and even then so slowly it hardly matters), most characters don't have it this high.

has influenced
Pillars of Eternity (Windows) 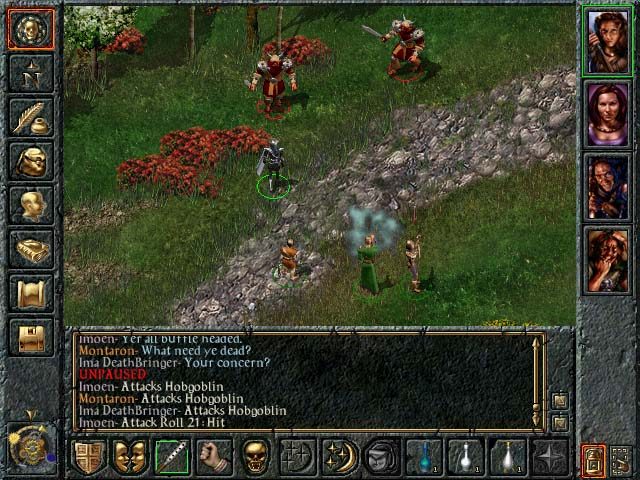